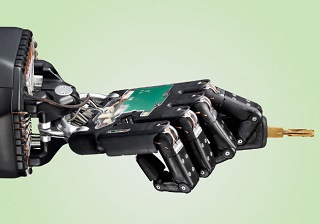 We’ve had some kinds of basic domestic robots available for some years, notably the iRobot Roomba that handily does your vacuuming (to a point anyway). However we are now starting to see devices (for that is what a robot is) with richer human interaction, and who’s purpose is less utilitarian. Here are two examples:

The Alderbaran Nao was first launched in 2006, but initially for research and education. However, today it is being marketed by Aldebaran as “A new member of the family”. The goal of Aldebaran is to “create an engaging, interactive companion and partner“.

Last month (June 2014) we saw the launch of Jibo, a rather scary one eyed swivelling table-top robot. As far as I can tell, its a crowd funded project, and real devices are not yet available. However its pre-launch video clearly indicates a vision for a device behaving as a friendly intelligent assistant. The opening marketing pitch implies that Jibo is less important to you than your family, but more important than other possessions. It seems to be pitched to occupy the space typically filled by a pet dog – “the worlds first family robot“. Like a swivelling circular iPad with Siri on steroids, Jibo will take photos and videos for you, act as a voice/email message portal, allow tele-presence (or presumably remote surveillance) maybe control your household heating/lighting, and even help with children’s bedtime reading. As the advert says, “He’s one of the family”.

Except of course, he’s not. ‘He’ is a device, and, most worryingly, a remote connected one at that. Connected, via the internet, to millions of web sites and potentially billions of remote humans. Some of those remote humans will not be friendly ones. Do you want a swivelling camera in your child’s bedroom connected to the internet? Do you want your family to trust this friendly little device as they would a family member?

Here is the first concern: ‘He’ is not a self contained agent, limited by ‘his’ physical location and local resources. ‘He’ is much more than he seems. ‘He’ can draw on information resources from around the planet, and has the potential to disseminate any information ‘he’ gathers in a similar manner. ‘He’ can record and perfectly store anything he sees or hears and can forward this to servers that will store this data forever. ‘He’ surely is not to be trusted as a family member, but to be treated warily, as any wise user of a web browser, skype or facebook account owner would treat their interaction with those systems.

‘He’ is most definitely an ‘it’.  It is a powerful device that may deliver great benefits in terms of information access and convenience, but must also be understood for what it is; a powerful portal into the fundamentally amoral and sometimes dangerous internet.

Here is the second concern: It is a robot. It is a machine. It is NOT a family member. Why are these companies marketing robots as if they were people? It is unnecessary and confusing. It is also potentially dangerous, in the sense that people are being actively encouraged to ascribe human values and agency to these machines. Should we invest emotional attachment to a machine, or educate our children to do so? Should we trust a machine, like we trust members of our own family? In my view, certainly not.

A device must have a purpose. It must do something in order to be valuable (the notable exception being art). A person has inherent value, irrespective of what they may or may not be able to do, or even to think. This is a fundamental difference between a naturally occurring intelligence, and a manufactured artefact.

There are different classes of device, and different issues to be dealt with for each class. Much has been written on this subject, and here and here are good starting points. Here are some of my initial thoughts.

This is what your smart phone does today. It seems intuitively clear that your mobile phone is not alive, and is not a family member. It is a tool that is used for business, communication, entertainment and so on. No reason why these capabilities cannot be delivered in robot form, with voice interaction and vision capabilities. Very useful. All the security concerns applying to mobile phones obviously apply. Robots could obviously also be helpful by doing household chores or by otherwise helping people physically.

Children play with toys, and it is good that they do. A toy containing some element of local AI embodiment is not necessarily a bad thing, provided it is clear to the child that the device is a mechanism, not a naturally intelligent thing, like a dog or a person. The child may pretend the device is naturally intelligent (as they do with dolls or toy animals), but the child recognises the difference between its fantasy and real world reality.

Adults also play with toys (what else is a track racing car or a model helicopter?), and it seems to me the same applies to adults, although personally I worry about adults spending time playing with toys!

This is where it gets more contentious. Is it valid to develop a relationship with a human constructed device in the same way that one would develop a relationship with a naturally occurring animal like a dog or a cat? Some humans derive satisfaction and meaning from caring for animals of all kinds, even fish or spiders. Should we always say that to develop any such relationship with a manufactured device is specious and harmful? I am not well qualified to write on this subject, nor am I either a pet or animal lover. However, it does seem to me that as long as there is no deceit or pretension involved, and no confusion on behalf of the user of the device, then maybe there is utility here.

The idea of placing autonomous robots within a domestic or neo domestic environment is a sound one, and there are great and obvious benefits for those who would be happy to have robots in their homes. However, these robots are devices, they are not members of the family, and it is very unhelpful that robots should be being marketed in this way. A robot should never deceive a human, and neither should a robot manufacturer!

One thought on “The domestic robots are coming!”