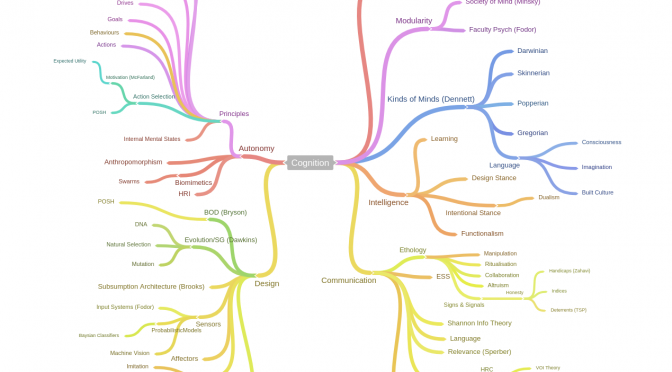 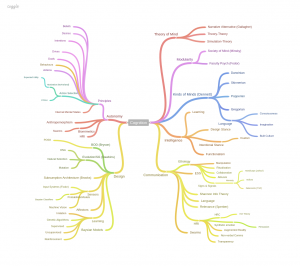 The Victoria Gallery in Bath has recently acquired Grayson Perry‘s ‘Map of Days‘. I went to view it today, and found it at the top of the staircase – it would have been nice to find it at the entrance to a rabbit hole, because as soon as we start down this path, everything can tend to get a little weird. It’s a curious artefact, appearing to be a map of a walled city, with a river running along almost three sides, rather reminiscent of the city map of Bath. However the rivers, roads, buildings and so on are all named according to things that Perry thinks are either within his mind, or external things that influence him – “I’ve portrayed myself as a walled city. The wall …… represents my physical skin….but it’s permeable. I absorb the influences and the ideas of the landscape I find myself in. I am as much my baggage as the person holding the baggage.”

Perry is clearly grappling with ideas of mind and self. He says “It’s a popularly held belief that in the middle of ourselves, our deepest, core-est identity is this sort of pearl, this immutable centre of who we are as individuals. I feel now that that’s a rather false belief”. Perry of course refers to ideas of the ‘soul’ or perhaps the ‘spirit’.

Since this is a blog article rather than a book, I can hardly begin to delve into this topic, but suffice to say that as a cognitive scientist, I see the mind as arising out of the remarkable complexity of the brain and body. There is no homunculus, no duality, and in truth no disembodied self. Perry is right to say that his internal mind contains ideas, but we also use tools to extend the human mind beyond the body itself. I’m doing it now as I write this article: assembling ideas and recording them externally. By this means I can refer to them again at a later point, and I can also pass this part of my thinking to you. We store vast quantities of useful information in databases and access it with simple queries, we allow programs like spreadsheets to offload much of our quantitative thinking, and help us in decision making. This is what the philosopher Daniel Dennett (Kinds of Minds, 1996) calls the ‘Gregorian mind’. Thus we have a huge cognitive advantage over other animals that must store their entire minds within their bodies. Over time our Gregorian minds, equipped with language as a primary tool for information transmission and storage across generations, and much later other artefacts (particularly writing), have enabled us to build culture and civilisation.

The ‘self’ that Perry is aware of arises as a mechanism to coordinate the huge parallel processing capability of the brain, to allow us to successfully undertake long term, complex tasks and achieve long term goals at the expense of immediate sensory gratification. Consciousness therefore informs our action selection (Bryson, J. J. (2012), A role for consciousness in action selection. International Journal of Machine Consciousness) and it’s an open question whether non-human animals have it, although it seems overwhelmingly likely that many do to some extent.

One really useful tool that we can use to extend our minds is a ‘mind map’. Really this is just some kind of graph linking related ideas together, such that we can inspect them visually without having to keep them all in mind at once. We can also show our little map to others, and use it as a shared basis for discussion. I have recently found these tools very useful, particularly a web based tool named ‘Coggle’. It’s very simple, rather limited in the diagrams one can draw, but very quick to use, and therefore much more likely to be used. It’s still quicker to use a pencil than a PC, but this tool gets pretty close.

Six months into my PhD, here is a map I made in Coggle to pull together lots of ideas relating to cognition:

It’s not as visually appealing as Perry’s, but at least it has some colour, and more importantly its been very useful to help organise my mind. I hope you will add ‘mind mapping’ to your list of mind extending tools.

2 thoughts on “Mapping the mind”